Victoria's Reel Time Fishing Charters was founded in 2004 by owner and operator, Matt Cini. Starting out as a part-time venture, the business grew steadily over the years with an expanding clientele and loyal sponsorship to now being a highly reputable company.

Matt Cini prides himself on his hands-on approach to the business. Reel Time is regularly featured in fishing publications around the country and Matt Cini has appeared on many T.V shows such as Fishin' Trip, You Fish, Hooked with Dave Butfield, IFish, River to Reef, Adventure Bound, Top Gear, Postcards and Rove. 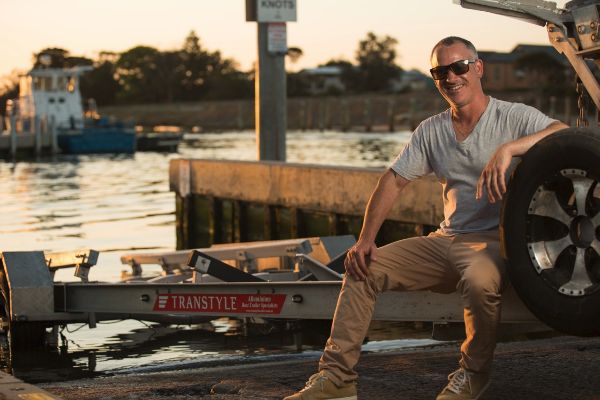 How it all Began Matt Cini's Fishing Charter story

In early 2004, Matt Cini was working full-time as an injection moulder whilst juggling family life and trying desperately to fish as much as possible. Good mate John Goodrich, who had known Matt for many years and was all too aware of his passion and success as a recreational fisherman, told Matt that it was a waste of unique talent to simply fish as a hobby and that if Matt was to go and get a coxswain license, that he would help him with the resources to start a charter business. Once he got his ticket, a second-hand boat was purchased and fitted out, the name was decided and the 'Reel Time' brand was born. As soon as word got out that Matt Cini would be doing fishing charters, bookings came in thick and the phone hasn't stopped ringing since! 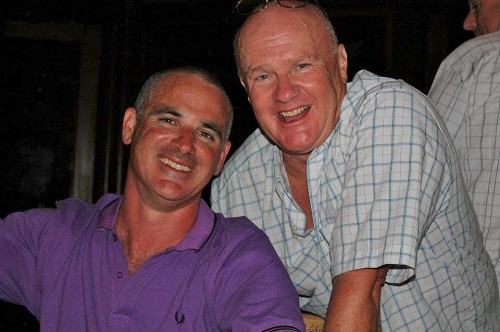 For the first four years it was a one man show, with Matt doing all the bookwork as well as back to back charters, but by 2008, with both kids settled into school, Matt outsourced some help to take over the desk and now has a full-time Team at Reel Time taking care of bookings and administration (Netable). As a team, the business grew even stronger and an expansion was inevitable. Reel Time #1 was purpose built in 2008 to accommodate larger groups of up to eight people and in 2009 the decision was made to build a second boat to meet the increasing demand for a Reel Time experience. When it came to employing a second skipper, he knew that his selection would be critical and have to be a top notch fisho! Matt Cini hand picks his Deck Hands & Skippers very carefully! 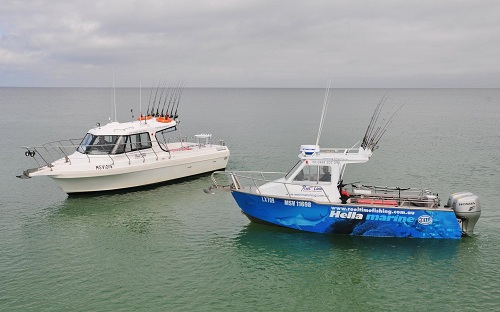 Side by side and ready for action!
Reel Time Fishing Charters continues to grow bigger and stronger every year,
with a large clientele gained mainly from word of mouth

A Change is as good as a Holiday Fishing Charter Beginnings

The first Reel Time Fishing Charter vessel was a 6.3m Pro Marine half cabin, which was purchased in 2004 and rebuilt from scratch. After only a few months, Matt found that it just didn't have the fishing space required for charters of up to six people and decided to upgrade. 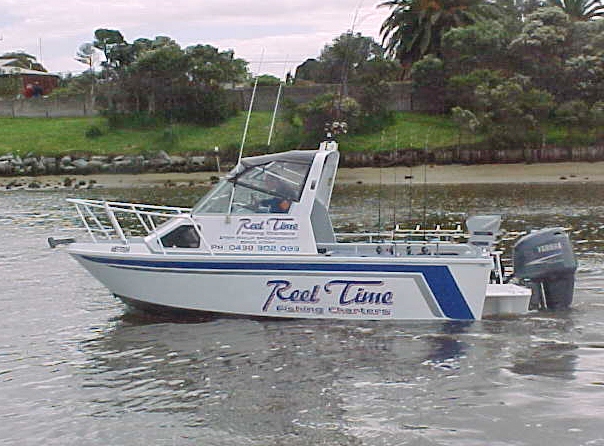 The second Reel Time Fishing Charters vessel was a 7m Pro Marine cuddy cabin that provided ample fishing room. In 2006, she got a makeover and was named "Spidey Sense", which Matt's kids had nicknamed him after comparing his ability or 'sense' to find fish day in-day out, to their favourite crime-fighting superhero, Spiderman! 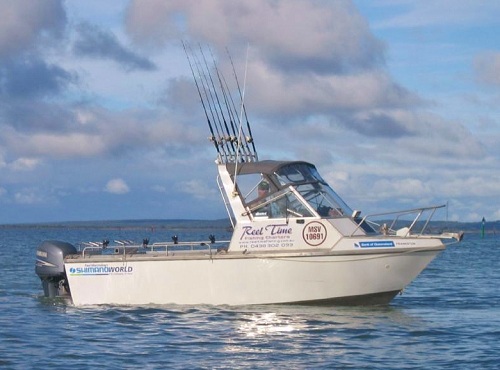 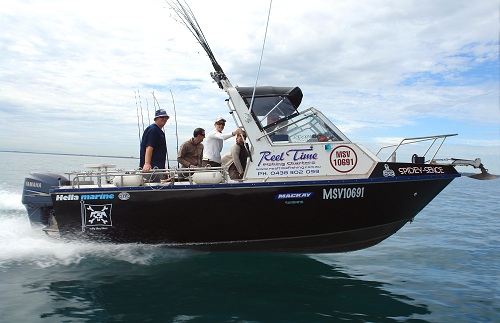 By 2008, Reel Time had become one of the busiest charter boats of it's kindly operating in Melbourne and Matt decided it was time to invest in a boat that was custom built to not only suit his style of fishing but to give customers the comfort they deserved, with inclusions such as a large deck area and a plumbed toilet in the cabin. The result is a 7.4m Seatamer 'Eliminator' that is in the survey to carry up to eight passengers and is also purpose built to charter offshore. Hella Marine was a big player in making this dream achievable and has showcased their sensational range of LED lighting on board.

To now Matt Cini's very own Custom Built Pelagic 8.5m Built and Designed by Matt himself! After 10 years of running fishing charters, Matts idea of building the perfect fishing charter vessel was always an imaginary dream in his mind.
until one day his dream became reality. it all started with a pen to paper drawing a rough sketch planning exactly how to build a boat that was big enough to still tow as Reel Time Fishing prides itself on not being locked down to one area and needs to be where the fish are whether that be Westernport bay port Phillip bay or portland.
After getting all the relevant information from Vic Roads Regarding Dimensions/Weights for safe towing practices the size was determined! 8.5m L with a 3.2m W.
Within in this space Matt had to achieve so much, I wanted to get 8 Passengers all comfortably around the Vessel so walk around was my only option, Reducing the Cabin because of this design still needing space for a fully plumbed toilet room to have a nap or accommodate dry storage for Safety Equipment etc, A work area for Matt to Work his magic with all the Latest and greatest Furuno Electronics, Fish Finders, GPS, Radar, Auto Pilot to name a few! A lock up Wheelhouse a must.
Finally, this was all achieved 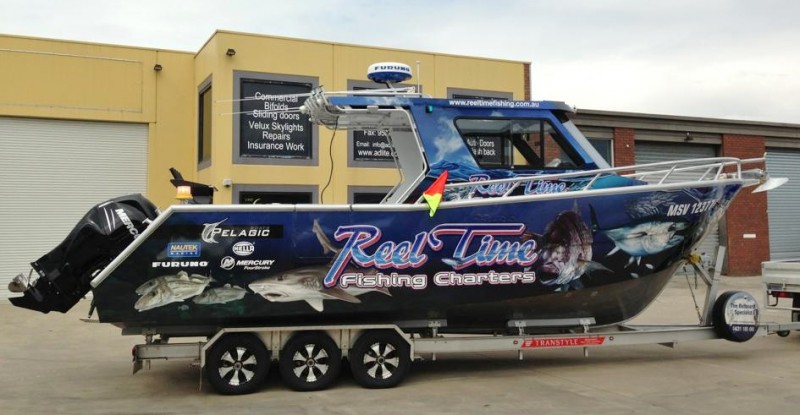 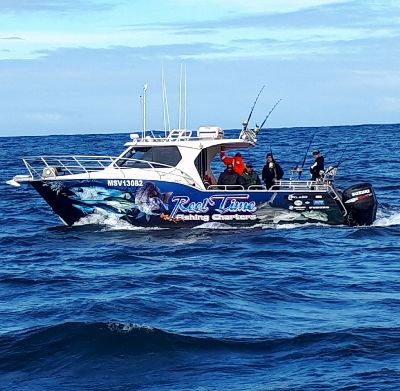 Matt reluctantly went fishing with his uncles in Port Phillip Bay when he was eight years old, I say reluctantly because as a child, he had a great fear of deep water. He was seasick that day, but his uncles persevered until he caught his first fish and from that moment the fear was gone and he was hooked! 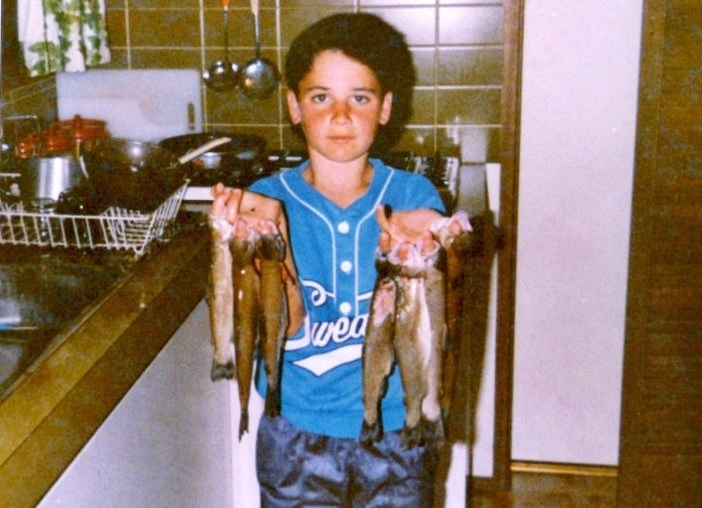 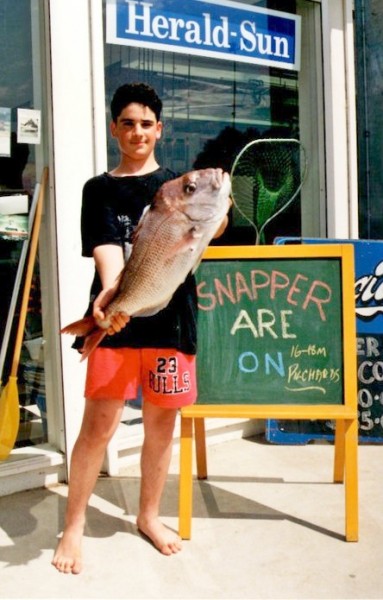 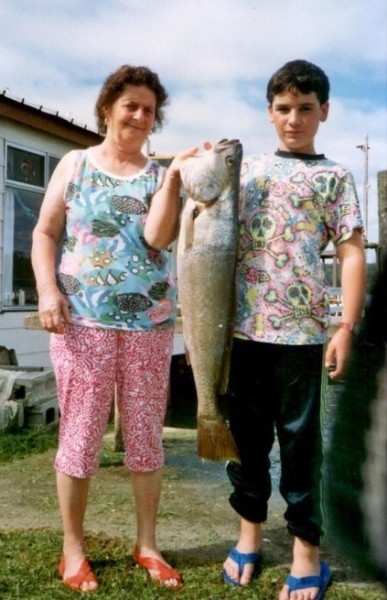 His uncles still took him out from time to time, but that wasn't enough and most weekends saw him convincing his parents to drive him to the local trout farm. By age ten, one of his uncles, Fred Abela, saw that his passion for fishing was fast becoming an obsession and being an obsessed fisherman himself, enjoyed mentoring his young nephew. Although Fred was happy to take Matt fishing most times, he wasn't about to sugarcoat the amount of hard work, determination and discipline that is required to succeed. Matt was never one to shy from hard work and they fished the bay nearly every weekend and most days after work to continually produce fine bags of snapper. 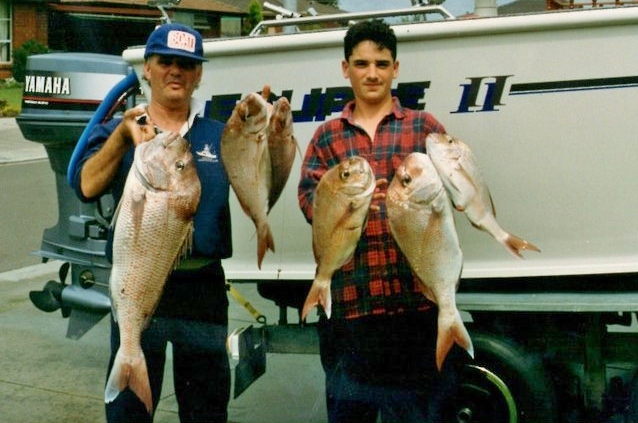 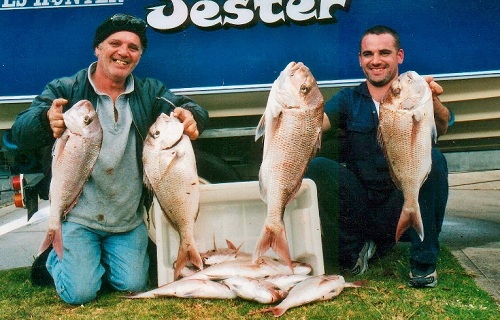 Matt's parents were pleased that their son was enjoying his new found recreation, but found that it was fast becoming a problem when his school rang to see why Matt was taking so many days off. All was revealed one sunny day when his mum was driving in her car and spotted Matt, fishing rod and tackle box in hand, boarding a bus to Frankston to fish off the local pier. 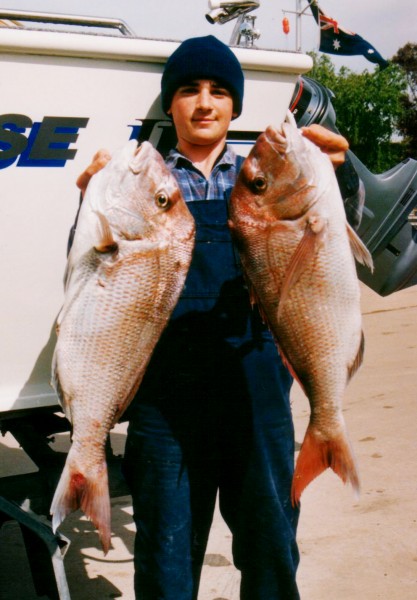 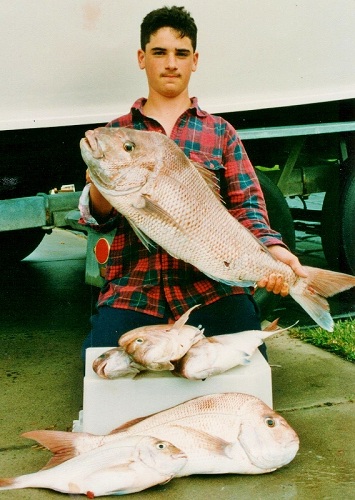 By age 14, Matt's overriding passion for fishing was becoming a major distraction and he had little interest in his school work. After many meetings with his teachers and parents, it was decided that he would be far more productive working for his father's company as an injection moulder. He was so grateful for the opportunity (and the cash flow that enabled him to support his habit) that he worked relentlessly day in, day out, providing there was freedom to sneak out for a fish when the weather was good. He worked so hard in between fishing trips that by his early 20's, he was regarded by his peers as one of the best injection moulders this side of Melbourne. 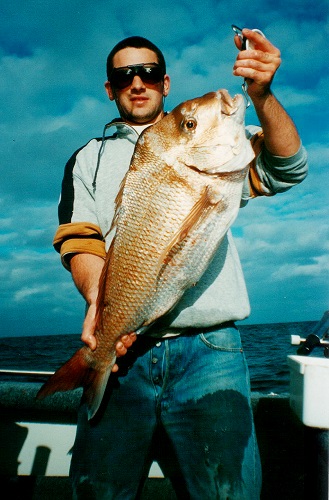 By 16 years of age, Matt had already earnt
himself a reputation as a young gun angler

In the late 80's, Matt was introduced to Lee Zahlen, who he still considers to this day to be one of the best snapper fishermen in Melbourne. Before they met, Matt can remember being a young teen at the ramp and watching in awe, when even on the hardest days, Lee would always come in with his bag. Until he started fishing with LZ in the late 90's, Matt had never used a GPS or sounder and was only just starting to realise the benefit of the fishing structure. Lee took Matt under his wing and fine-tuned his techniques that without a doubt moulded Matt into the fisherman he is today. 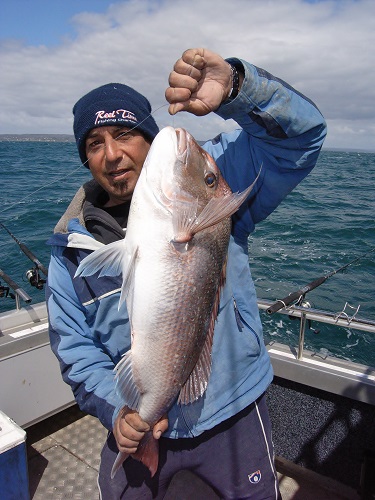 The Cini clan a Family Man Matt Cini loves Fishing with his Kids!

Matt and his Fiance have 4 children between the two of them extending their family, Marlon, Blake, Aaliyah and Aliana  Matt has had some awesome fishing sessions in his 30 odd years, but these days as a doting father, nothing gives him more satisfaction than taking the kids out on a nice calm day and watching their faces light up with every 'first' moment they have. 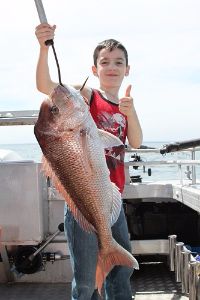 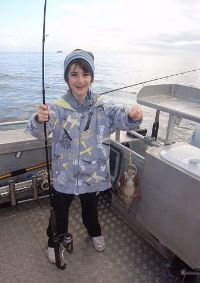 Fisherman in their own right... Marlon & Blake Cini